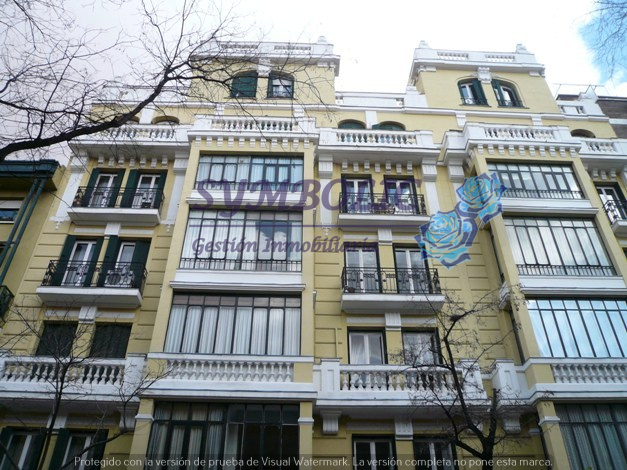 Classic building, of admirable architectural beauty, where the house we are selling for rent is located.

Located on the first floor, it has a tremendous light, mainly because the orientation is South. High ceilings that provide an incredible amplitude. It is distributed in Hall, living room with access to the balcony, 3 bedrooms, large bathroom, large kitchen (with office area), and 2 distribution aisles.

It is located in one of the most prestigious neighborhoods of Madrid such as the Barrio de Almagro, within the district of Chamberí, which is a reference for those who want to live in a privileged way, considered a quiet area where an innumerable variety of representative buildings are located. , that provide an identifying and stately image to the environment.

Chamberí houses the Sorolla Museum and the Geominero Museum. The first is located in the house where the Valencian painter lived and, apart from the exhibition of his paintings, a visit to his installations allows him to enjoy his valuable collections of sculptures, furniture and ceramics, as well as his fantastic garden.

Not far away is Andén Cero – Chamberí Station, an old metro station, closed in 1969, which has been rehabilitated to become an interpretation center for the Madrid Metro.

Another historical point is the Plaza de Olavide, in Trafalgar, a cozy garden square with many terraces, a usual meeting place and tapas.

Between the neighborhoods of Arapiles and Vallehermoso, on Cea Bermúdez Street, and over a modern complex of 35 200 square meters dedicated to stage art, the Teatros del Canal rise, whose building – winner of the National Architecture Award – is a work by Juan Navarro Baldeweg.

The Abbey Theater, the Galileo Theater and the Luchana Theaters are also located nearby.

On the stretch of Fuencarral street, which goes from the roundabout of Bilbao to Quevedo, is the Cine Paz, inaugurated in 1943, which offers a selection of the best independent and auteur cinema of the moment. Almost opposite is the Cine Projections in an art deco building dating from 1932 and where you can enjoy the latest film premieres with the most advanced technology.

Nearby, and also in the Chamberí district, are the Sala Berlanga (in Argüelles, owned by the General Society of Authors and which projects Spanish, Ibero-American, European and auteur films), the coquettish Little Cine Estudio (attached to Quevedo and that it offers classic of the cinema), the Cines Verdi (in original version, in the street Bravo Murillo) and the Count Duke Verdi Alberto Aguilera and Count Duke Santa Engracia.

You can not miss Calle Zurbano, which has come to be described in the New York Times as “one of the best in Europe”, a street dotted with mansions, boutiques, restaurants and charming museums.

Year of construction of the building where the house is rented: 1,921